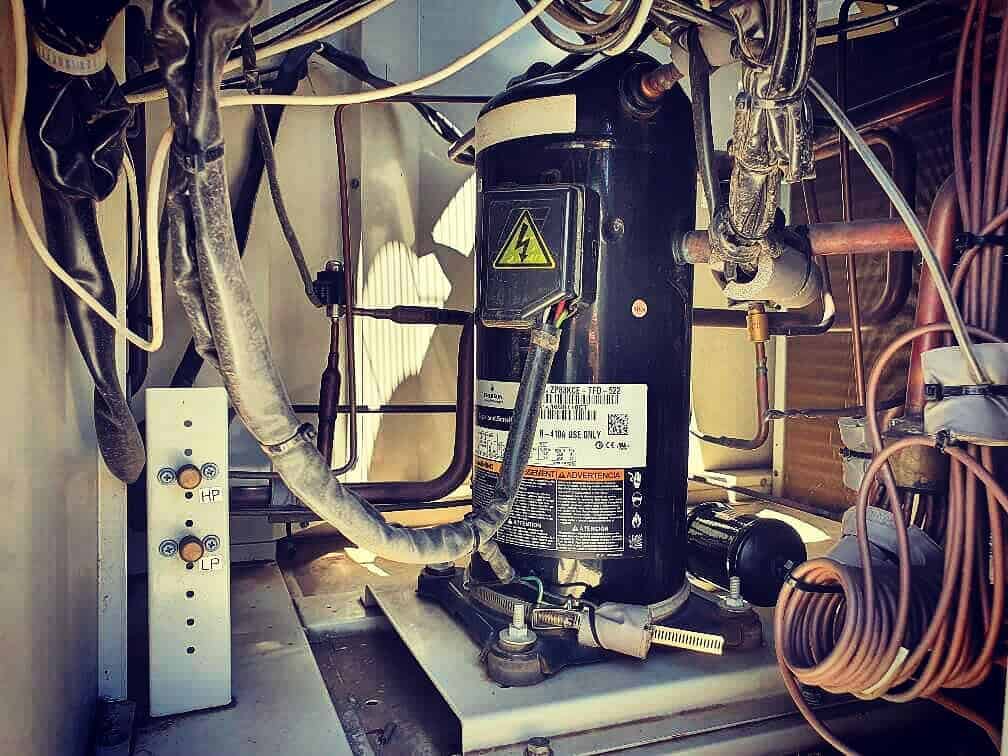 There are a number of different air conditioner compressor types found in an array of air conditioning systems from varying HVAC brands on the market.

Certain manufacturers will make use of dissimilar compressors depending on their own specifications, and each compressor will function uniquely mechanically.

That said, any air conditioner compressor utilized within an air conditioning system is designed to serve the same underlying purpose.

A compressor is the heart and lungs of the operation within an AC system, and without a compressor functioning correctly, you’ll be receiving nothing but a whole lot of unpleasant warm air from your AC.

So, let’s uncover some key functional facts about an air conditioner compressor, and precisely why they are regarded as such an essential component in every HVAC system.

How Does an AC Compressor Work?

In short, a compressor’s sole function within an air conditioning system is to circulate refrigerant throughout the refrigeration circuit.

This liquid travels further through the refrigeration circuit before entering a refrigerant control device, which is typically either a Thermostatic Expansion Valve (TX valve) or a capillary tube device.

Both devices mentioned deliver the same end result. How so? They simply regulate the refrigerant flow into the evaporator. With the reduction in pressure via the TX valve (or capillary), then refrigerate again changing state into a low-pressure vapor.

This low-pressure vapor then returns to the compressor via the suction port and the process repeats. As you can imagine, there is an enormous amount of heat generated from the compressor throughout this procedure.

That’s why an adequate amount of refrigerant in a vapor form returning to the compressor to reduce the internal operating temperature is paramount. An efficient AC system will showcase a healthy-looking sweat on the low-side suction port, as the temperature of the suction line will be at saturation, which would be around 32 degrees.

The refrigerant returning to the compressor at this temperature will allow the compressor to operate effectively without generating excessive heat under load.

Not only that, compressors can not pump liquid. In order for any AC system to function correctly without harming the compressor, the refrigerant in a vapor form must only be returned to the compressor via the low-side suction port. 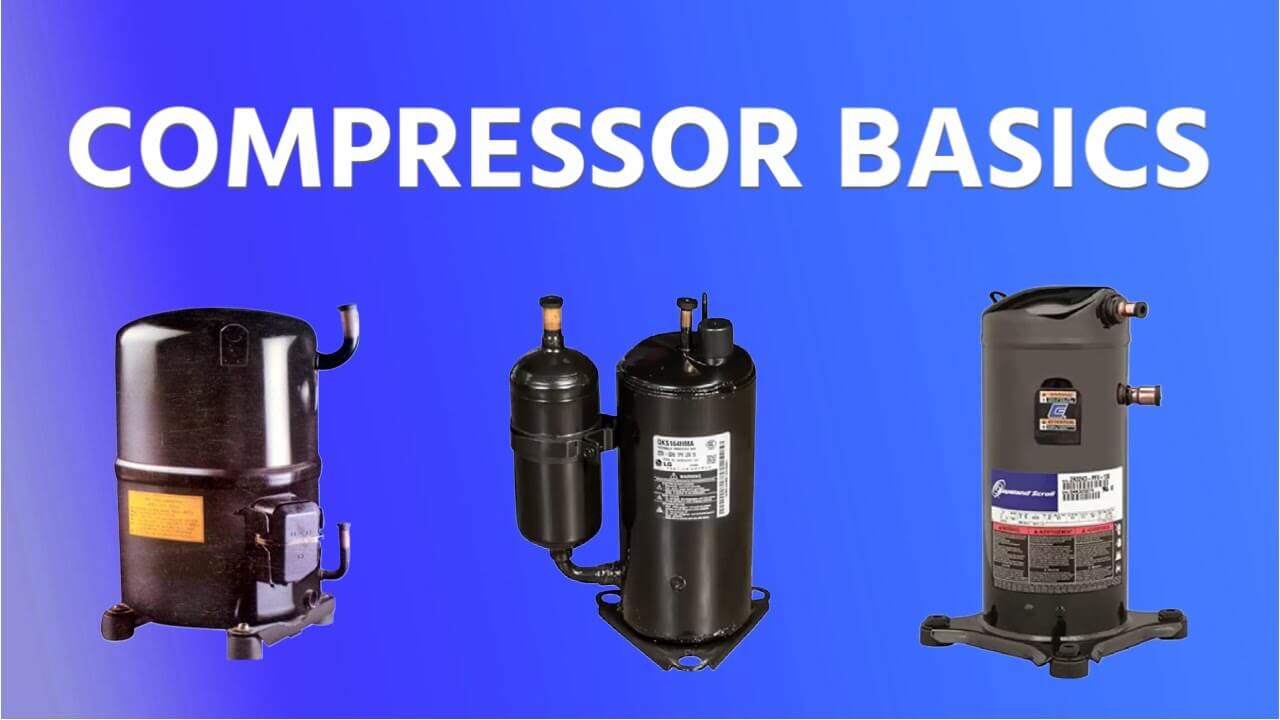 How to Know if Your AC Compressor is Bad?

Your home AC compressor can fail for a multitude of reasons. But, for any compressor to fail, there is an underlying root cause that will result in either mechanical or electrical impairment.

One of the more obvious grounds for compressor failure is when an AC system is put under excessive load while the system is short of refrigerant.

If an AC system was operating slightly above the low limit preset value of the LP switch for an extended period of time, it would cause the compressor to generate intense heat potentially damaging the electrical windings.

Another cause of compressor malfunction is mechanical valve seizure. Typically, this fault can be identified quite easily. It becomes apparent when the compressor attempts to run, but merely hums loudly and trips the electrical overload or circuit breaker.

Generally, these are some main major faults that will indicate whether a compressor is actually dead while conducting troubleshooting:

Either way, if it is an electrical or mechanical malfunction you’re encountering with your AC compressor, you’ll at the very least require a multimeter to successfully diagnose the suspected fault.

If that’s something you don’t have and aren’t willing to purchase, it’s best you call an expert to conduct further essential fault-finding. 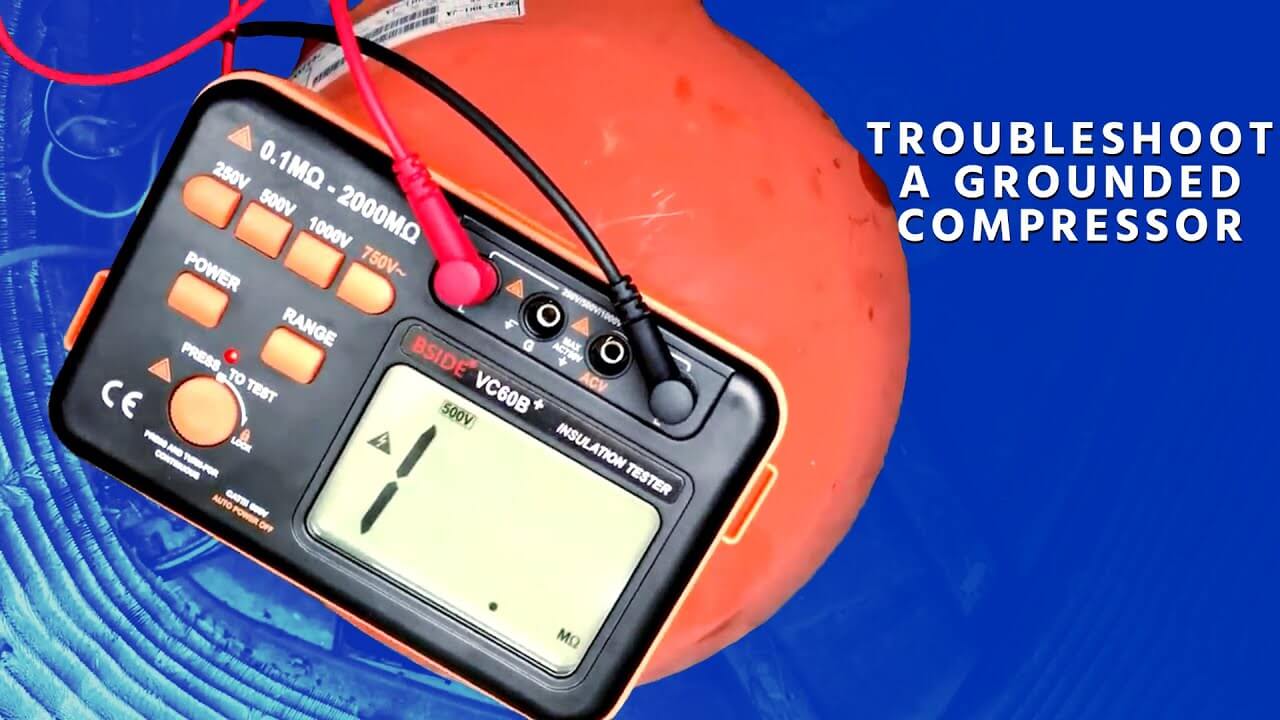 How Much Does it Cost to Replace an AC Compressor?

This will largely depend on both the capacity of your AC system and the manufacturer’s brand name. As previously discussed, different manufacturers make use of various types of compressors.

But hypothetically speaking, let’s say you had a ducted split system with a total cooling capacity of 58,000 BTU from Daikin. This AC system utilizes a Hermetically Sealed Swing-Type compressor which would cost around $350, and the replacement labor costs would equal roughly $900 including materials.

As you can see, $1,250 is not exactly chump change, and this is more of a conservative estimate. Depending on the original price tag of your entire AC system, replacing it outright could be the more feasible alternative considering its aging condition.

Is it Worth Replacing an AC compressor?

If you’ve consulted with a professional HVAC contractor about repairing your AC system that regrettably possesses a faulty compressor, it would be best to request both a quote to repair and or replace.

This is especially the case if the compressor is burnt out as there are additional costs associated with replacing a burnt-out compressor.

Ideally, if your home AC system is of a window and or split system variety (non-ducted) and has been diagnosed with having a faulty compressor, you should assuredly consider replacing it with a new system.

“You’re not doing anyone any favors by taking shortcuts and or applying bandaids to an aging AC system with mechanical failure issues. Simply put, if in doubt, throw it out.”

Swapping a window AC or split system out for an entirely new air conditioning unit requires a lot less labor. Plus, if the existing system is on the same refrigerant as the new replacement unit, it’s a simple like-for-like install.

I’d recommend going this route when it comes to faulty compressors within air conditioning systems in the lower end of the capacity spectrum, as you will be receiving a completely new unit with a manufactures warranty.

While merely replacing the compressor may seem cheaper on paper, you never know what other problematic issues might pop up in the near future.

I’ve learned this lesson the hard way throughout my years in the HVAC industry, and I’d almost always recommend going with the latter.

I experienced this first hand when I endeavored to save the customer a few bucks by replacing a faulty compressor instead of the air conditioner itself, and then a mere 9-months later, the condenser coil-sprung a leak costing the client another $1000 plus in repairs.

Sure, these things happen. But, you can potentially eliminate dead money when dealing with home air conditioners that have passed their used by date once a major malfunction has occurred, by instead investing those repair costs into a new and improved air conditioner.

Although, if we’re talking about a home ducted air conditioner with a faulty compressor, it might be best to bite the bullet and go with the repair works. That is unless if you’re willing to butcher your pretty ceiling to access the indoor unit and replace the entire fan coil unit.

What is the Best Home AC Compressor?

If I was choosing a new air conditioning system and had the option to select a compressor for it, I’d go with an inverter scroll compressor.

Throughout my career in the HVAC industry, if I ever encountered a dead reciprocating compressor and had the option to replace it with a scroll compressor, I most certainly would.

Why’s that? Because I knew once I had begrudgingly swapped the reciprocating compressor for a scroll, I’d never have to touch the damn thing again.

Why Are Scroll Compressors More Efficient?

Scroll compressors have a far greater life expectancy than reciprocating compressors as they don’t have the traditional valve and piston construction. Scroll compressors operate by which a moving scroll rotates on a base plate countering a fixed scroll that circulates the refrigerant through a chamber-like structure.

This mechanical scroll function creates massive internal compression as the movable scroll rotates increasing and decreasing the size of the chamber size when rotating against the fixed scroll.

One thing to note about inverter scroll compressors is that they are more expensive. That’s why if you’re on a budget, I’d probably just stick with a standard hermetically sealed compressor that utilizes inverter technology.

That said, the majority of manufacturers today only develop AC units with inverter compressor technology, so you won’t have to look too far.

There are two brands that come to mind that manufacture air conditioning systems using scroll compressors, and both of these brands do so superbly.

If you’re interested in purchasing an air conditioner with a high-tech inverter scroll compressor, check out either Daikin or Mitsubishi as both brands have excellent quality inverter scrolls. 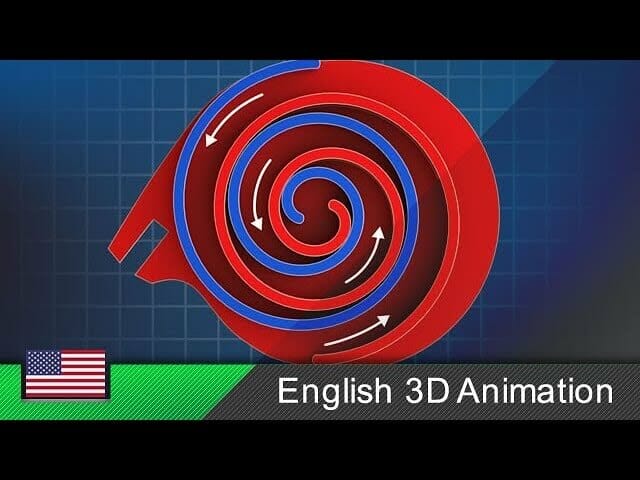 So hopefully this article covered everything you initially once queried about AC compressors. By now, you’ve likely come to the conclusion that a compressor is both a complex and crucial component that is vital in order for your AC system to operate.

Whether you were pondering replacing a questionable compressor for your home air conditioner or simply seeking advice to perhaps hire the right expert, this guide should be beneficial to you in assisting with the decision-making process.

Just remember to never work live on electrical circuitry when conducting any fault-finding on HVAC equipment unless you’re trained to do so.

Also, I’d suggest consulting with your manufacturer when troubleshooting your home AC if you hit a roadblock. The vast majority of manufacturers are surprisingly accommodating, and in most cases have a technical support team that will be willing to help. 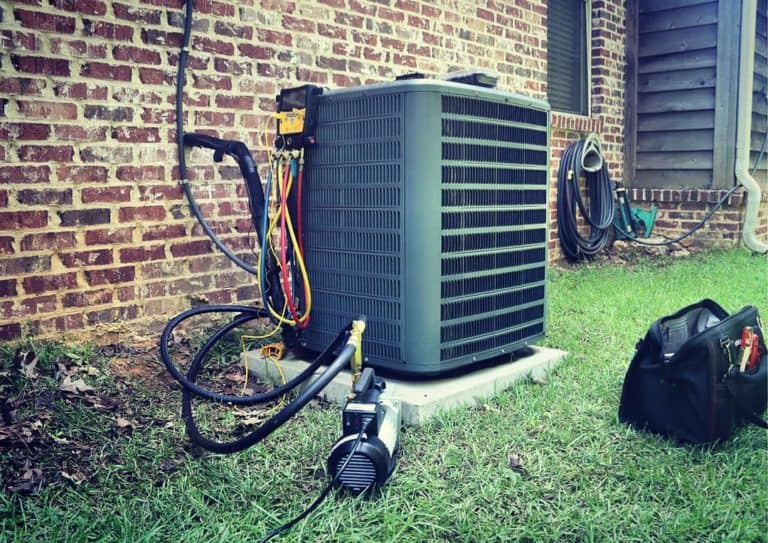 It’s a hot and sticky 90+ degree day with the midday sun blistering through your windows and your AC is not blowing cold air.  You’ve tinkered around with your air conditioner’s thermostat and adjusted the temperature beyond subzero levels, but to no avail, your AC is not cooling your house down. So, before calling the… 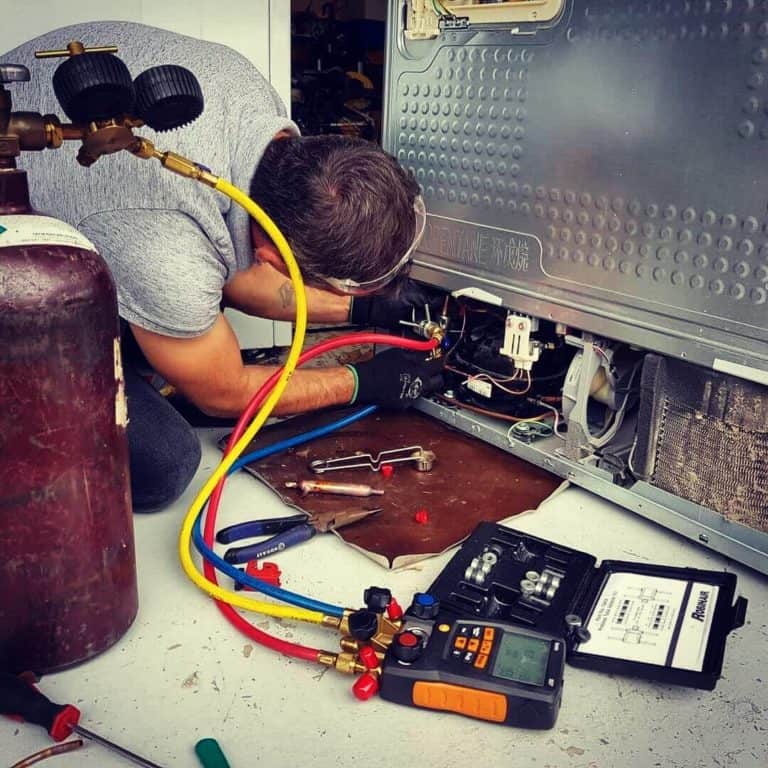 There’s a handful of reasons why you might find your fridge not cooling, some of which will be an easy fix and others that could well be a death sentence for it. Effectively fault finding a refrigerator that isn’t maintaining its desired temperature requires a few basic hand tools and a rather rudimentary process of… 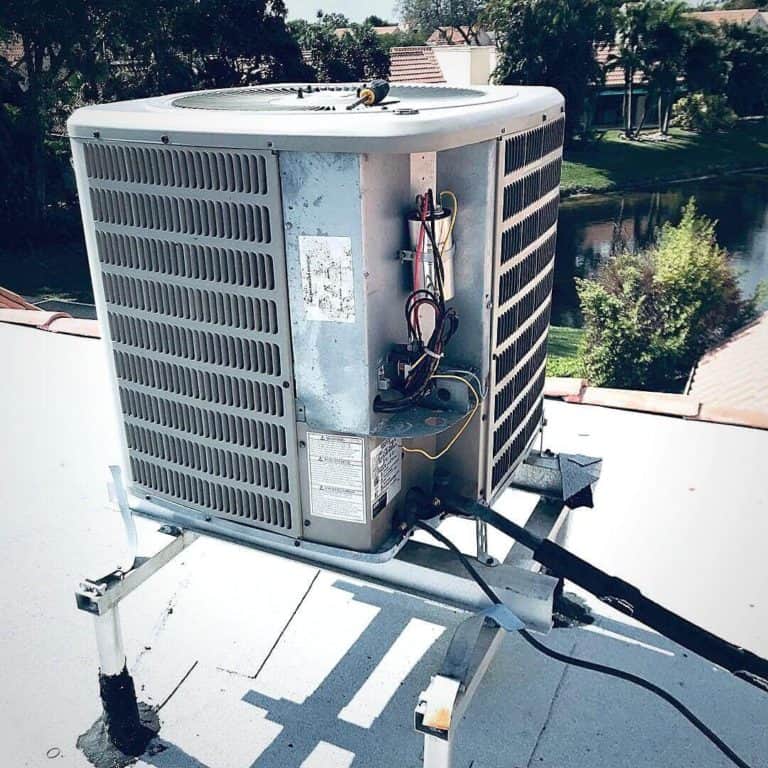 Depending on the supply air temperature being produced from your AC and the current setting of your thermostat, you could be encountering what might be a quick fix or a major mechanical component overhaul. What some folks might perceive to be “warm air”, may actually be recycled air from the conditioned space. Your AC system… 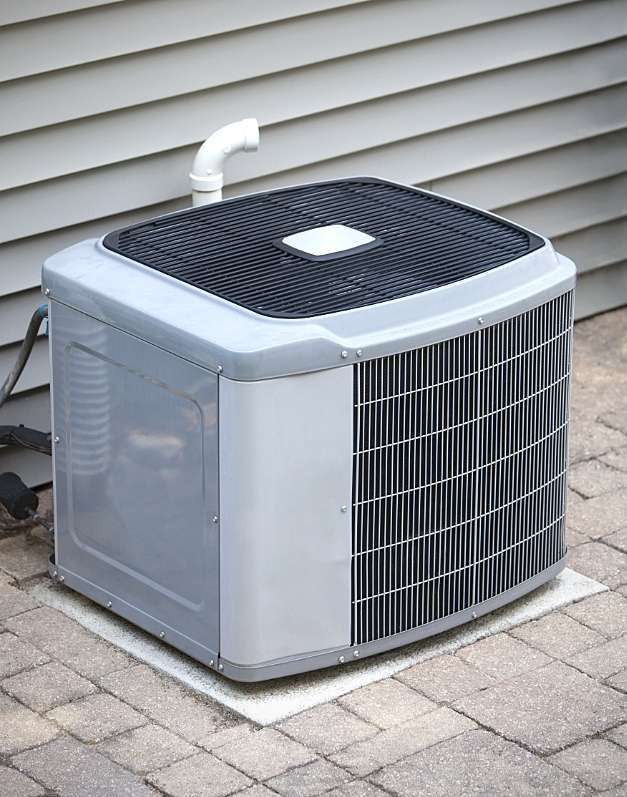 Whether your air conditioner is on or off, an annoying noise is the last thing you want to hear out of it on a hot and humid afternoon. Typically, a buzzing noise, scraping sound, or even a loud slamming noise, indicates a potential major malfunction with your air conditioner. This is why if you are…

This common problem with your air conditioner leaking water inside your home is typically experienced in high humidity conditions and can cause significant damage to your home if not tended to ASAP. Typically, water leaking from your indoor unit, whether it be a ducted split system or wall-mounted split system, is caused by either a…