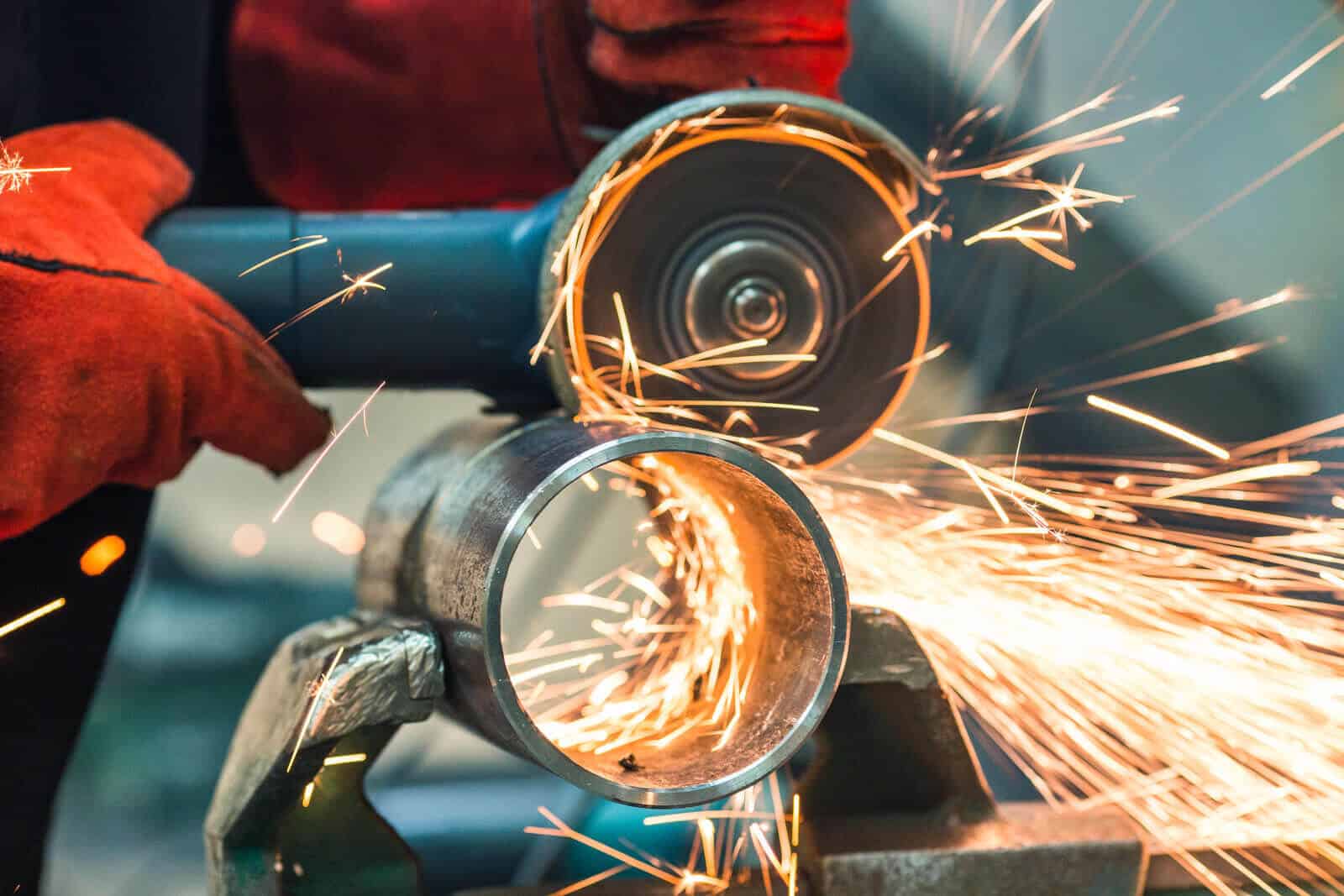 Cast iron pipework was once heavily utilized for mains drainage and sewer pipe applications and is typically found in older residential and commercial type properties.

While cast iron pipework was once considered an incredibly robust alternative for such applications as it was expected to last up to 75-years, it had ceased being used for residential builds in 1975. Why is that you wonder?

Because cast iron develops rust, and once it does, the potential springing a disastrous leak increases drastically. That's why today both ABS and or PVC are typically used instead of cast iron, plus installing the latter is a hell of a lot easier due to the massive reduction in weight.

If you are dealing with problematic cast iron pipework that has to replaced due to a leak, fear not, rectifying such a conundrum is humanly possible, even if you're not a qualified plumber.

Removing a section of cast iron pipe can be tricky, and especially if you're working in a confined space.

But, if you've got the right tools for the task, the process is relatively simple. The one tool you can use and likely have on-hand is an angle grinder.

While you could use a reciprocating saw or even a hacksaw to vigorously slice your way through cast iron, utilizing an angle grinder to swiftly cut segments of cast iron pipe, is a viable option too.

So without further ado, let's go over how this effectively done.

Can I Use an Grinder to Cut Cast Iron Pipe?

With the right cutting wheel equipped to your sturdy angle grinder, you can take to just about anything if your grinder is of the heavy-duty variety. Angle grinders are versatile enough to be used to cut tile for a bathroom upgrade or sections of angle iron for building a basic shed.

Although, if the angle grinder you're considering using to cut cast iron pipe was the same price as the socks you're now wearing, you might want to consider upgrading, as that Fisher-Price tool just won't cut the mustard.

But, if you did manage to invest in something that can withstand the rigors of cutting through tough materials like cast iron, you sure as hell can. As long as you've got yourself a decent cutoff wheel, or better yet, a diamond wheel fitted to your angle grinder, you're good to go. What is the Best Way to Cut Cast Iron Pipe?

The best method for successfully cutting cast iron pipe is to do so on a sturdy workbench with the piece of pipework firmly seated in a bench vice. But, if that's not possible because you live in a wonderful place called reality, you'll have to merely adapt to the environment your operating in.

The majority of the time, you'll find the problematic section of cast iron pipe that requires your most urgent attention, happens to be located under your house or in a pit you've begrudgingly dug up. If you're lucky enough to be staring at a section of cast iron pipe that simply protrudes from open ceiling space or is erected vertically from the ground, simply have it.

While you can make use of that brute for an angle grinder to effectively chop your way through that prehistoric piece of cast iron pipework, there is another alternative worth mentioning. The other feasible power tool that will happily ravage any would-be section of cast iron pipe is a reciprocating saw.

The only other safe substitute for successfully cutting cast iron pipe if you do not own a reciprocating saw or a snap cutter is to resort to using your old faithful angle grinder.

While cutting cast iron using an angle grinder as opposed to a reciprocating saw might be considered slightly more time consuming, it still a fantastic no-nonsense option that works like a charm.

Note, cast iron is extremely heavy and you don't want a section of pipe swinging around out of control after chopping it. How Do You Cut a Pipe With an Angle Grinder?

Cutting cast iron using an angle grinder is a quick and painless operation that should only take a few minutes. Here's the exact method for cutting through virtually any section of cast iron pipework.

To get a better idea of what you'll be in for, here's a video breaking down the exact method for cutting cast iron pipework with an angle grinder.

How Do You Cut Cast Iron Pipe in a Tight Space?

Alright, you have a couple of options when venturing into a confined tight space to cut cast iron, and utilizing a raging angle grinder that produces an abundance of sparks isn't what I recommend.

As previously discussed, you can attach a carbide-tipped or diamond blade to a reciprocating saw to effectively make this cut. Using such a tool is hugely beneficial when operating in confined spaces as you'll be able to make the necessary cuts without any hazardous sparks.

Now if you don't own a reciprocating saw and you're a DIYer operating on a budget where purchasing one is not practical, utilizing a soil pipe cutter (or also known as a snap cutter) is the way to go.

Now I know what you're thinking, a snap cutter is expensive, and that's a boatload of money for a tool I'll likely use once or twice. Well, you can always get your hands on a snap cutter for relatively cheap by just renting one for the day.

Get in touch with your local tool shop or even try Home Depot as I know you can hire a decent snap cutter from them for about $30 for the day. 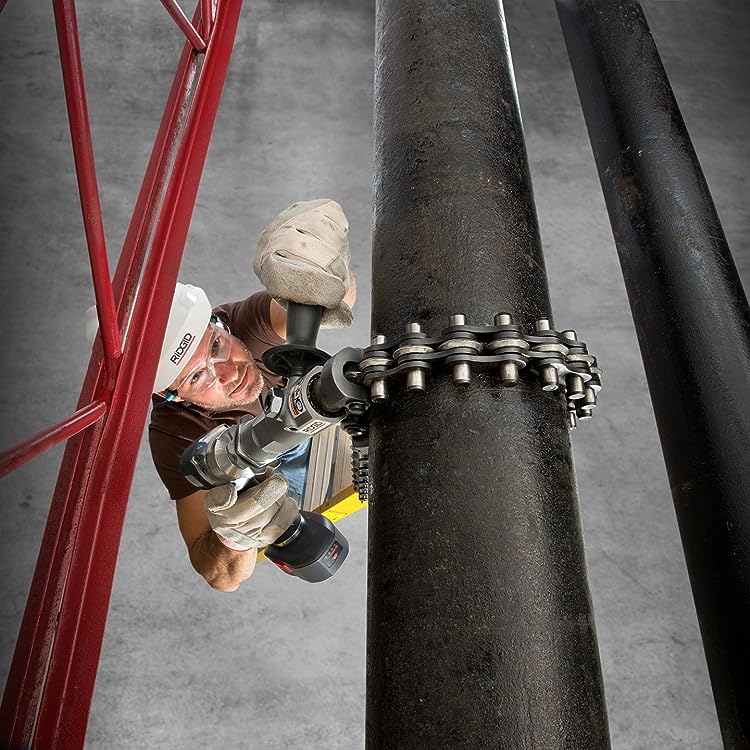 Anyways, assuming that you've conducted the correct preparations and taken the necessary safety precautions, let's break down these two techniques utilizing both tools.

Cutting a Cast Iron Pipe With a Reciprocating Saw

First, we'll cover cutting cast iron pipework in a tight space using the reciprocating saw. Now whether you go with a diamond blade or a carbide-tipped blade is entirely up to you, but I'd recommend the latter.

Cutting a Cast Iron Pipe With a Soil Pipe Cutter

Next is every plumber's favorite method. Cutting cast iron pipework with a snap cutter. The most common snap cutter you'll likely hire is a ratchet soil pipe cutter. That's what we'll be covering here today.

And that's it. You've now successfully made a clean and precise cut with either a reciprocating saw ratchet soil pipe cutter.

Keep in mind, if you're operating in a riser, you'll likely need supporting riser clamps and will also have to cut the pipe in sections to safely remove it.

How to Replace Cast Iron Pipe With PVC Pipe

Alright, so you've cut the dodgy segment of cast iron pipe in question and now need to replace it with some lightweight and highly durable PVC. This involves a bit of prep and might require you to get your hands dirty, which could be taken literally, especially if you're repairing a leaking cast iron sewer pipe.

Whether you're attempting to splice in a section PVC pipe to overhaul a length of rusted cast iron pipe or you're trying to merely tap into and incorporate a new connection, the same basic practices are required.

The first mandatory step is to remove any would-be lead from the pipework so you can effectively install a service bushing. This type of service bushing that is inserted into the freshly cut cast iron pipe will allow you to transition directly to PVC without any concern for potential future leaks.

Once you've measured and cut the pieces of PVC pipe you'll be using to update the cast iron pipework with, you should ideally conduct a dry run by connecting every joint without applying any primer or glue. The reason for this is that once you've applied the glue and the PVC pipe is in place, there's no turning back.

Now if you're using rubber couplings with stainless steel clamps that can be fastened or unfastened, playing around with primers and or glue will be none of your concern. Exactly what fittings you'll be using will solely depend on the job you're carrying out.

But to get a better understanding of how the pros operate and observe just how one would replace a leaking sewer pipe, here's a fantastic breakdown of the task at hand.

So you're now a bona fide expert when it comes to cutting cast iron pipe and can confidently accomplish this feat with absolute ease.

While we covered a few different alternatives for cutting cast iron pipework, you really can't go too wrong with either option. Whether you utilize an angle grinder, reciprocating saw or a ratchet soil pipe cutter (we recommend you hire), you'll be able to cut and update that portion of troublesome cast iron pipe like a professional plumber. 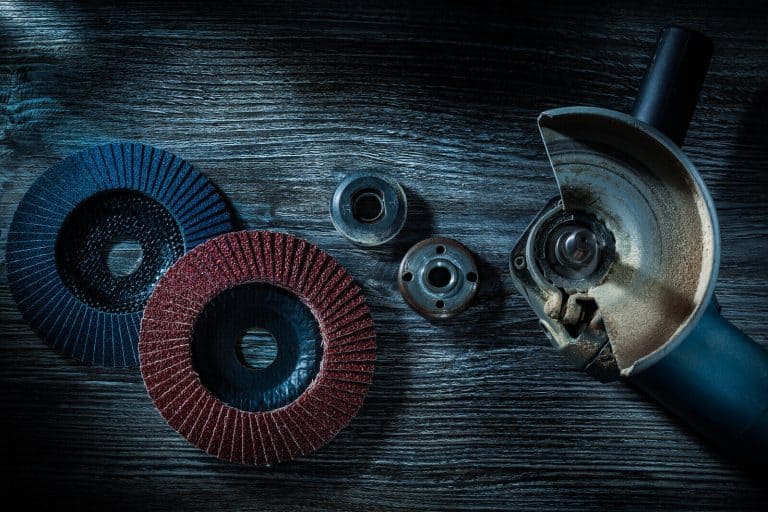 Can you buff with an angle grinder? Well, if you’re considering using a high-speed angle grinder to buff and polish your beloved 77′ Ford Pinto to socially acceptable levels where the opposite sex doesn’t cackle like a gang hyenas as you roll by, go ahead, have at it. Although, the only reason I recommend you eagerly… 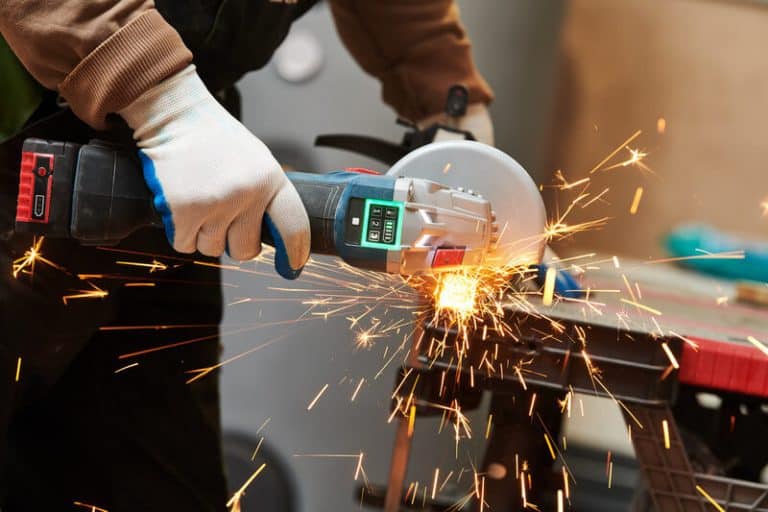 Cordless angle grinders are most certainly unmatched when it comes to their portability and convenience. There have been some major improvements with battery technology in recent years which as lead to mass adoption of power tools like cordless angle grinders. But does that mean you should invest your hard earn cash on the latest and greatest… 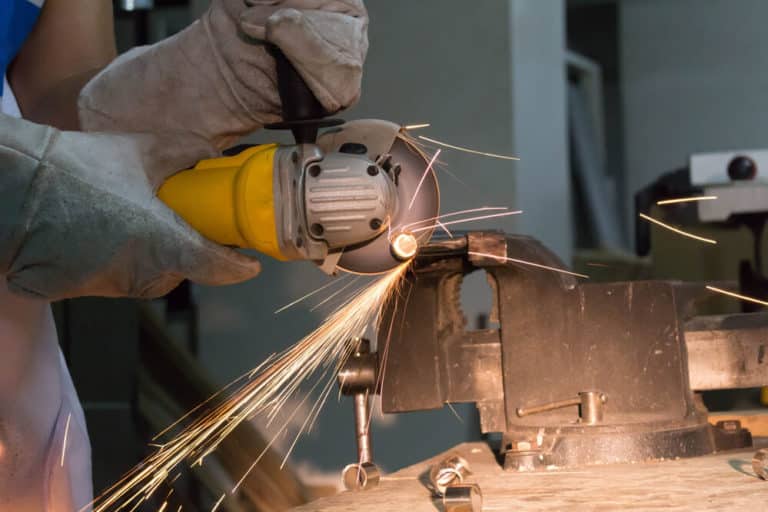 There is one question that is quite common on the relevant boards, and that is: “Can an angle grinder cut metal?” The short and simple answer? Absolutely! In fact, in the sea of hand-held tools available, the angle grinder that seems to be the most versatile of power tools for metalwork.  That’s why it comes as no… 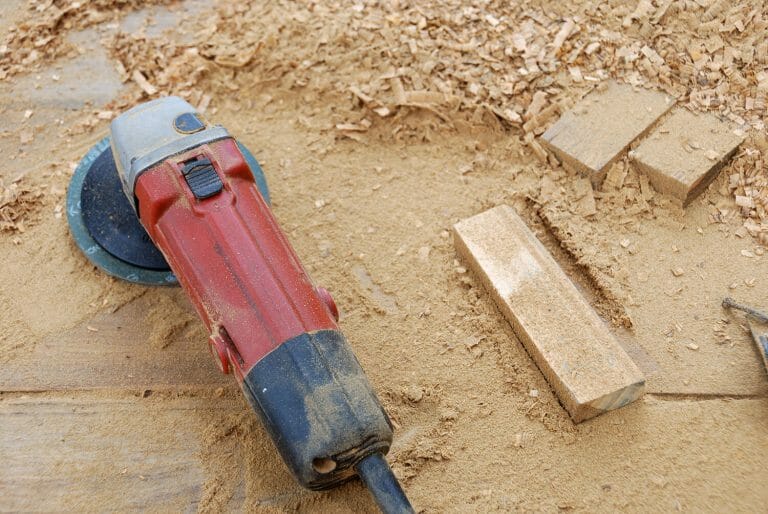 A high-quality angle grinder can be used to cut through everything from metal, to brickwork, and even concrete without much trouble at all. Although, there are a few pivotal points to ponder before breaking out your dependable angle grinder to maul that would-be piece of lumber.  We did some in-depth research on this questionable topic and came… 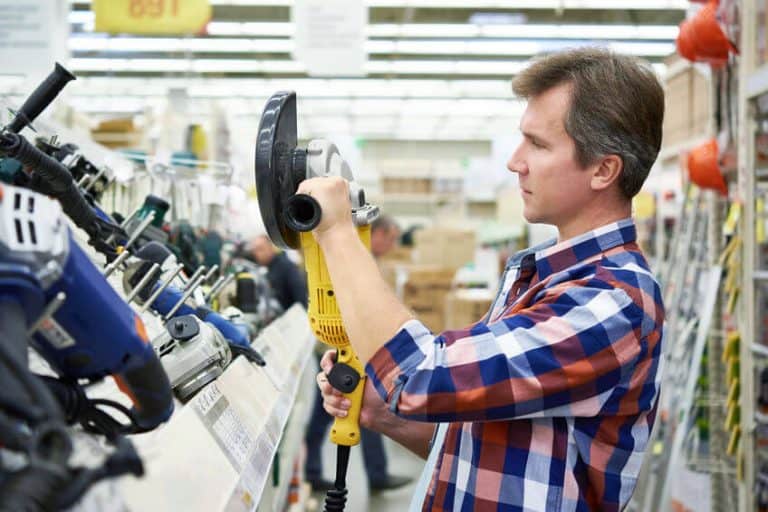 Tool manufacturers in recent years have really ramped up the R&D in the cordless technologies department. This has been due to the hefty amount of investment and mining of lithium which is considered by many macroeconomists as the new gold. There has been a monumental amount of this hot commodity coming out of the ground for… 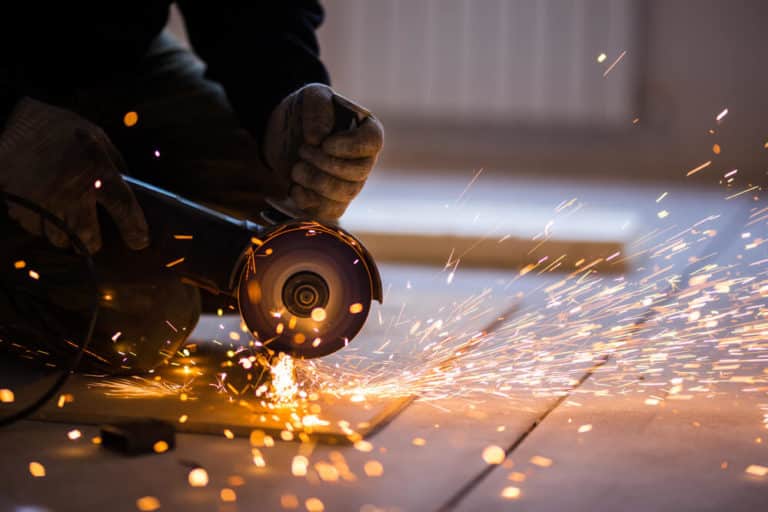 Learning how to cut tile with a grinder should be a task you master with a grinder any some offcuts within a few hours. Although, the ideal tool of choice for cutting ceramic tiles is most certainly not an angle grinder.  The wet saw is excellent for doing such work, but we have to agree that not…